The Po Plain formed itself in the period between the Pliocene - 5-2 million years ago, when the sea lapped the Alps and the Apennines - and the Wurm - 75,000-10,000 years ago, the last glacial period.
The coastal line on the Adriatic Sea became stable 5,000-6,000 years ago, and only since then it became possible to follow more precisely the evolutionary process of the Po mouth.

Bronzo Age (5,000 years ago)
The river Po branched off near Guastalla, in the lower reggiana plain, giving origin to two branches: Po di Adria in the north and Po di Spina in the south.

8th century BC
A great flood at Sermide led to the decay of Po di Adria: the new course went through Calto and Stellata and met again at Po di Spina.

Etruscan Epoch (6th-5th century BC)
The important activity of Po di Spina led to the creation, beyond Ferrara, of two branches: Olana (then Volano) and Padoa (from which the name Po derives), also known in the past as Eridano.
Olana, with a branch called "Gaurus" (from which the name Goro derives), flew into the sea near Mesola.

Roman Age
The Delta developed in the south of Comacchio, while Adria was situated in a gulf.

6th-7th century AD
Death of Po di Spina. The marshes around Comacchio spread out and Po di Volano in the north and Po di Primaro in the south strengthened. The town of Ferrara rose in the point where they branched off.

Year One Thousand
Around Po di Volano, the reclamation activities carried out by the Benedictine monks of Pomposa and subsidence, which led to an abundant penetration of brackish waters into the marshes of the Po Plain, changed once again the aspect of the territory. In the early Middle Ages, the river Po ran in the south of Ferrara and Mesola was an island surrounded by the sea.

1152
A historical flood caused the so-called "Rotta di Ficarolo".
The course of the river straightened oneself towards the north.
In the following centuries the Delta gradually extended towards that direction.
The branches towards north-east swelled and reduced the water flow towards Po di Primaro and di Volano.
Despite the intervention of the Estensi who deviated the river Reno into the bed of the old river Po, the progressive silting up of Po di Ferrara was unavoidable.

1598
When the last duke of the House of Este, Alfonso II, died, the territories of the Dukedome of Ferrara passed to the Papal State. Meanwhile, the Delta advanced towards the north with the branches called Tramontana, Levante, and Scirocco.
In particular, Po di Tramontana began to rise the bed of the lagoon towards Chioggia with its sediments.

1600-1604
Fearing that the expansion of the Delta in the north-east could lead to the silting up of the lagoon of Venice, at the beginning of the 17th century the river Po was deviated to the south towards Sacca di Goro with an artificial channel which is its current bed. This measure, called "Taglio di Porto Viro" (Porto Viro cut-off), determined the beginning of the formation of the modern Delta.
The old riverbed became a navigable channel, Canal Bianco-Po di Levante. If before the 17th century the Delta expanded of about 53 hectares per year, from 1604 to 1840 it grew of 135 hectares per year.

The Years after Porto Viro Cut-Off
After Porto Viro cut-off in 1604, in a few decades new lands emerged. This caused a frantic run by the nobles of Venice to purchase them.
In the documents, these lands were called "le Marine" - which witnesses their close relationship with water - and the purchase contracts were called "sales of waves in the sea".
The lands, cultivated with rice, were in precarious conditions, since they were surrounded by very low embankments which were seasonally leaped over by waters, enabling a slow reclamation activity with the silting up of the lands, but also leading to the destruction of the harvest.
Such situation gave not the opportunity to build the magnificent villas typical of the Venetian inland, but only houses inhabited by local farmers, to whom the landlords entrusted the management of the estates.
In the maps of the mid-18th century we can find the palaces of Tiepolo, Farsetti, and Dolfin situated in the homonymous locations, which still today preserve these names.

19th century
The expansion of the river Po and its branches towards the east caused the filling up of Sacca di Goro, giving origin to the Municipality of Porto Tolle, extending the island of Ariano, and forming Sacca di Scardovari.
In the mid-19th century many large estates of Veneto were interested by the investment of considerable capitals, thanks to the landlords' initiative, and steam began to be used as driving power applied to the first agricultural machines and other instruments. However, initiative and innovation could not avoid the sea floods and the channeling of the river. As a matter of fact, a fragmented adjustment involving only some properties was not enough: it was necessary to carry out a complete adjustment of the territory.

The Unification of Italy
With the law Baccarini of 1882, the first one granting state funding to Reclamation Consortiums, the drainage of some territories was allowed: among them, Isola di Ariano with the creation of the Dewatering Pump of Ca' Vendramin. Important reclamation activities began.

The 40s
The discovery of methane supplies (methane water) and the subsequent extractions led to a subsidence of over 3,5 meters below the sea level. The water, which was extracted in the first 250/300 m of non-consolidated sediments, freed methane gas with a low pressure.
The extraction of this water, together with the extraction of freshwater for domestic and industrial use in the years of reconstruction contributed to increase the subsidence of the Delta, and many lands that had been reclaimed were flooded again.

1951
The river Po downstream Ferrara, diked in higher and higher embankments during the years, had accelerated its course causing increasingly intense floods.
The historical level was reached on 14th November 1951: the banks broke in Occhiobello, flooding the whole Polesine area.

2000
At the moment the Po Delta is completely below sea level, except for embankments, sandbars, and fossil dunes.
The water management is under the control of "Consorzio di Bonifica Delta Po-Adige", managing an important drainage water system with dewatering pumps of 6,000-7,000 kW of power able to lift up one billion cubic meters of water per year, introducing it into drainage channels. 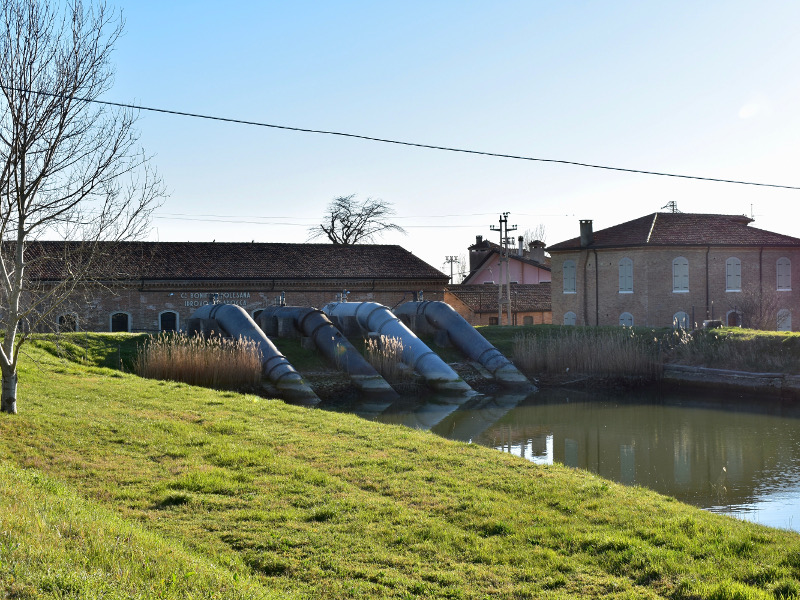 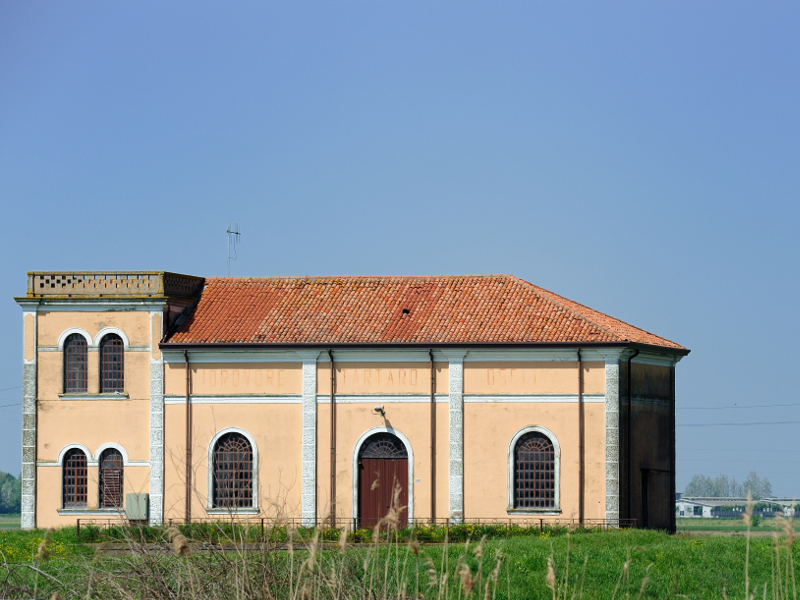 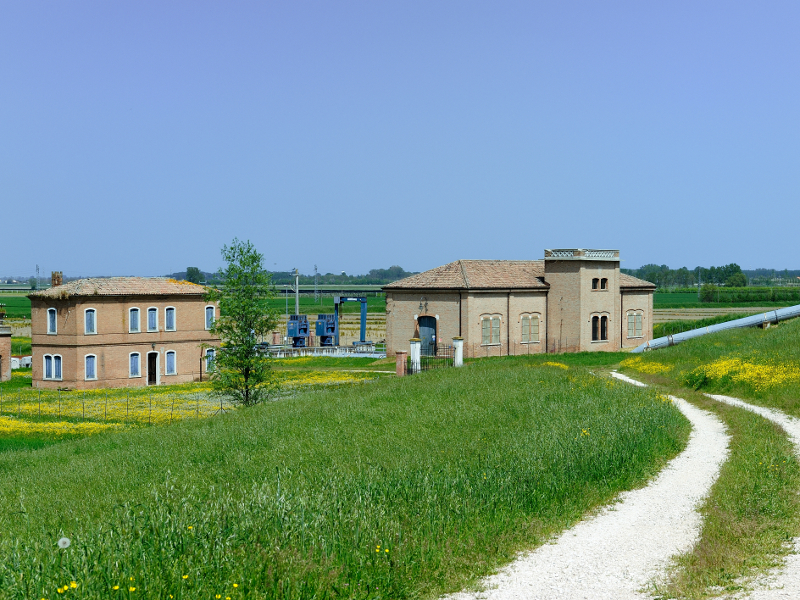 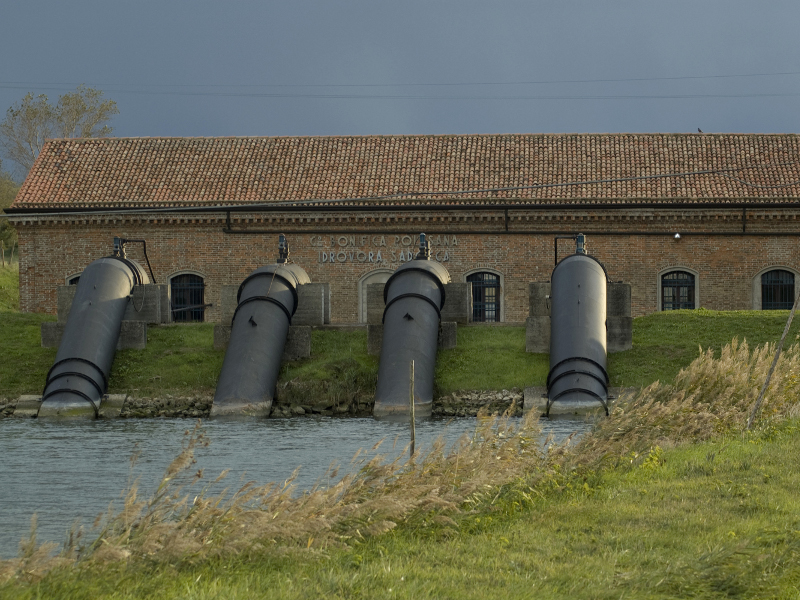